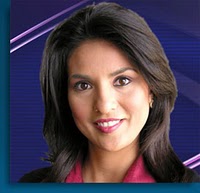 Rosa Flores (pictured left) joins KHOU-CBS in Houston. She previously worked for KWTV, the CBS affiliate in Oklahoma City. She co-founded the Oklahoma Chapter of the National Association of Hispanic Journalists and began a foundation “Corazon a Corazon,” that serves communities along the U.S. Mexico border.

Leticia Juarez makes a huge jump to the same station in Houston to work as morning reporter. “Letty” left KERO-TV in Bakersfield where she was a general assignments reporter.