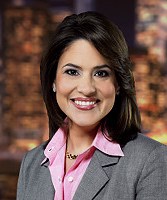 There’s talk Lynda Baquero, who has been an anchor at WNBC since 1996, first on the weekend desk and then on weekdays at 6 pm, will be taken off the newscast at the end of the month.

Richard Huff, of the NY Daily News, today is reporting that with changes expected since new management took over the station, Lynda has been looking for another job in New York. The Sr. VP of news and the GM of the station both left in March.

According to Huff, about Lynda’s potential change in status, channel 4 spokeswoman said “Discussions are ongoing.”