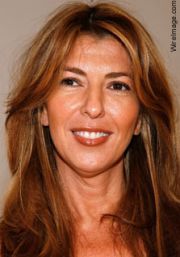 Nina has recently gained notoriety for being a judge on Bravo’s Project Runway. That show, by the way, has now moved to Lifetime, which is half owned by Hearst, which also owns… Marie Claire!

But according to Mediaweek, Nina will continue representing Elle during Project Runway’s fifth season taped this summer. She’ll take the title of editor at large for Elle through Sept. 1, and start her new gig at Marie Claire on Sept. 2.

Nina is a native of Barranquilla, Colombia. Her fashion career started in the public relations department for Perry Ellis, before moving to Mirabella magazine as assistant stylist and market editor. From there, she went on to work for Elle, where she worked her way up the ranks until she became fashion director in 2000.