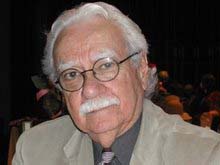 He has been an L.A. Times columnist since 1984, but January 19 will be the last time Al Martinez’s column will run in the paper – and not because he wants it to end. Why? He sent this email to mediabistro.com:

“I’m not sure why: too old at 79? no space for me? I don’t fit the hip, cool, Hollywood demographics? All of the above? Ask them. They did say they couldn’t afford me, but since I was “downsized” the first time and hired back as a freelancer, my salary has been halved and I’ve had no medical coverage, no vacation time, no expense account and generally no staff perks. I haven’t been THAT expensive. But I’ve never been a whiner, and I won’t be now.”

He says he’ll continue to reach out to his public via his blog and I’m sure this multi-talented writer will find something to do with his time. Al is not only a columnist, but an author, scriptwriter, documentarian and television series creator. The Pulitzer Prize-winning Al was also nominated for an Emmy in 1992 for the CBS-TV movie “Out on the Edge.” He authored “The Last City Room,” “City of Angles, a Drive-By Portrait of L.A.” and two books profiling Spanish-speaking Americans, “Rising Voices” in 1974 and “Rising Voices: A New Generation” in 1994. According to his bio, he also created three network television series and has 20 writing credits for TV movies.