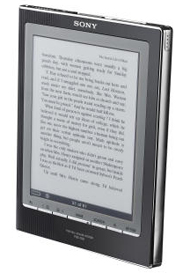 Could this be the solution for newspapers? An e-reader to download your favorite paper… at a charge, of course? It’s not so far-fetched, but the question is… will people pay?

Just days after announcing a possible sale or closure of the S.F. Chronicle, Hearst is set to start charging for its online content. In a memo picked up by the Wall Street Journal (which charges for access to its online content), Hearst newspapers president Steven Swartz tells company employees it will be up to management to figure out “how much paid content to hold back from our free sites…” although that “doesn’t mean we wall off our Web sites behind a paid barrier.”

Swartz says that in order to “offer the best in breaking news, staff and reader blogs, community databases and photo galleries,” Hearst will “need to expand the number of reporters, editors and photographers.”

Hearst, an investor in E ink, the company that provides the technology behind Amazon.com’s Kindle and other electronic readers, has apparently developed an e-reader of its own and plans to launch it later this year, according to Fortune magazine. The article points out that distributing the paper via a mobile device – which would eliminate paying for paper, printing and delivery – would save as much as 50% of the cost of putting out a periodical.