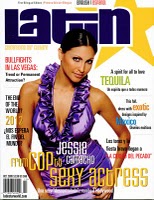 The first issue of Latin Star is out on the street. The new bilingual lifestyle magazine, targeting men and women ages 18-49 is hoping to gain footing in the national marketplace. Los Angeles-based Latin Star Corporation, which also promotes concerts, publishes the magazine.

Tatiana Bedoya, the founder of the short-lived Vixta magazine in Sacramento, is the co-publisher.

“My vision has always been to speak to Latinos through a publication that shows the respect I have towards our culture,” she tells me. “I was unable to continue publishing Vixta magazine at a local level due to lack of financing, but it was thanks to my magazine that Latin Star Corporation found me.”

The second issue is in the works and will be released shortly.