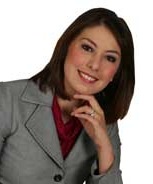 Station news director Michael Sipes tells me he was in talks with corporate parent News-Press Gazette for a year before taking the leap into producing Spanish-language segments. They hired Mireya in November and started airing news and weather on Dec. 7 on KRDO’s digital Telemundo channel, 13.2.

The segments, which air at the top (news) and bottom (weather) of each hour, can also be seen on their low-power signals Ch. 49 in Colorado Springs and Ch. 34 in Pueblo. The station also produces a Spanish-language site, TelemundoSurCo.com, which includes video clips of the locally-produced Spanish news briefs.

For Mireya, the new venture is an exciting experience: “It’s different from my home state of Texas, where there is a much bigger Hispanic population, but it’s great to be in a state like Colorado where so many people are interested in getting Spanish-language news.”

For the time being, Mireya anchors the briefs Mon-Fri and tapes weather segments for the weekends. She says there’s a lot of optimism and support from management and there’s talks of potentially launching a full-length newscast sometime in the future.

Prior to joining KRDO, Mireya was a reporter for KORO-28, the Univision affiliate in Corpus Christi.