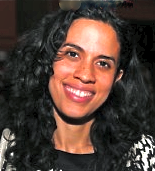 After 2 years with the magazine, Mimi Valdés Ryan has left Latina, in an apparent management shakeup. Mimi took over as editorial director from Betty Cortina in 2007, with big plans to overhaul the magazine. She was recently elected to the board of ASME, which lists her as Editor-in-Chief of kidult.com, a news and entertainment website for teens.

Mediaweek reports Latina publisher Lauren Michaels and Galina Espinoza were named co-presidents. Galina, a former senior editor at People, will take over the role of editorial director. She previously worked at Latina as deputy editor.