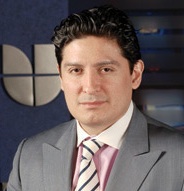 Vincent Cordero has been named EVP and General Manager of Fox Sports en Español (FSE). He will be reporting to Hernán López, President and COO of Fox International Channels. Vincent starts the new job on July 1.

Vincent resigned as GM of Univision’s Chicago O&O in February, after 5 years in that job. He joined Univision in 1999 as an executive trainee, after earning a law degree at the University of Chicago Law School.