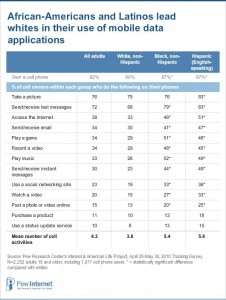 87% of English-speaking Hispanics own a cell phone and it looks like they’re using it to surf the web at higher rates than any other ethnic or racial group, according to a study by the Pew Internet and American Life Project.

The study shows that about 51% of English-speaking Hispanics use the internet on their mobile devices, compared to 33% of non-Hispanic whites and 46% African-Americans.

The study does not include Spanish-speakers, which would more than likely increase those numbers.

This study comes 7 months after the Pew Hispanic Center released another one indicating an increase in internet use among Latino adults to 64%.