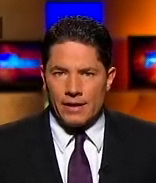 Fernando del Rincón’s last newscast on Mega TV was Friday night. He turned in his resignation on Tuesday and then tweeted about it, saying it was “irrevocable.”

On his twitter account he denies health issues prompted him to leave the station and he assures it’s an amicable departure.

An inside source tells me Fernando was without a contract for months and was unhappy about that. Mega TV has been undergoing a series of management changes since Cynthia Fernández-Hudson, the station manager who recruited Fernando, left her job earlier this year to become Sr VP and General Manager of CNN en Español.

Word now is he may be following his former boss to CNN en Español. On his twitter account, Fernando says he will be doing a live twitcam today at 5 pm ET, to answer viewer questions.

Fernando first joined Mega TV as a host for Paparazzi TV in April of last year. He became anchor of “Mega News” in October of 2009. Before joining Mega TV, he was co-host of Univision’s “Primer Impacto.”