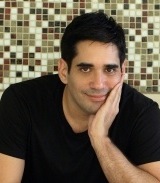 Hiram Enriquez is the new Director of Digital Media for MTV’s Tr3s. Monday was his first day on the job. He left a position at Univision Interactive Media. He’ll continue to be based in Miami.

“It all happened very quickly,” he tells me. He says he’s thrilled at the new challenge. Just last month, MTV dropped its famous initials to rebrand the bilingual music channel simply “Tr3s.” He’ll be working on the rebranding of the network’s online property.

Hiram had been with Univision’s online division for slightly more than a year before switching jobs. Before that, he worked as Programming Director for Yahoo! Hispanic Americas where he oversaw the editorial operations of Yahoo! sites in Spanish. Prior to joining Yahoo!, Hiram was the host and producer of “Zona Digital,” a show he created for CNN en Español which focused on the Internet and personal technology.