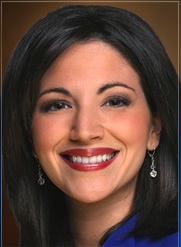 Lucy Bustamante’s last day as 10 pm anchor of WWL-4 in New Orleans is Friday, Oct. 1. She’ll be moving to Norfolk, where she’ll be weekend anchor and reporter for WVEC-13, also a Belo-owned station.

Lucy joined WWL-4 as a reporter in 2004. She became anchor of the station’s 10 pm newscast in Jan. 2006. She’s leaving her current job to follow her husband, a Navy SEAL, to a new post in Virginia Beach.