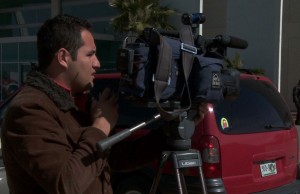 In the past week we’ve seen a heightened wave of violence in Mexico, including attacks against journalists there. Just last Friday, a car bomb was set off in front of a Televisa station.

Since 2000, 64 journalists have been murdered and another 12 are missing, according to Mexico’s National Commission on Human Rights.

The wave of violence in Mexico during the past decade, chiefly along the U.S. border between Ciudad Juárez and El Paso has caused such a state of terror, that there has been a rise in the number of people fleeing the country and seeking political asylum in the U.S.

The documentary also highlights the journalistic work and experiences of cameraman Eduardo Urrutia (shown in the picture), who in recent years has reported on more than 2000 homicides in Ciudad Juárez.