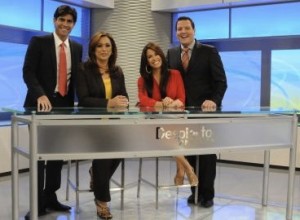 Billing it as a “rebirth” of “Despierta América” and the beginning of “a new generation of Hispanic television,” Univision today proudly aired a revamped version of its morning show.

With a reduced talent roster after the most recent departure of Ana Maria Canseco, the show now has 3 hosts and a newscaster. The current team consists of Karla Martínez, who has been with the show since 2006, Raúl González, a D.A. 10-yr vet, and recent newcomer Poncho de Anda. Neida Sandoval, who has been with the show since its inception in 1997, continues to do the news segments.