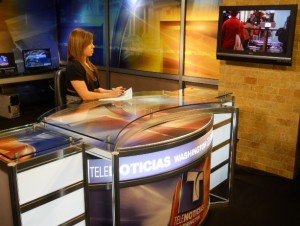 WZDC, the ZGS-owned Telemundo affiliate in Washington D.C. has just upgraded its local newscast to HD, currently available only on Comcast’s cable system in the D.C. market.

In prepartion of the HD upgrade, the station recently expanded its news studio with a state-of-the-art facility. It will debut a new set and look as part of the HD launch this month.