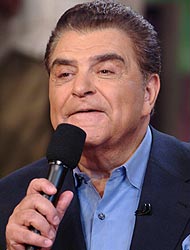 Flores, a 43 yr-old Chilean man, filed a paternity suit in October of 2011. La Tercera newspaper broke the story in January of this year. The DNA results were revealed today in Santiago’s Family Court. According to the paper, the man’s attorney said he will not appeal the ruling.

Meanwhile, a prosecutor is investigating allegations that someone, on behalf of Don Francisco, tried to bribe a lab director into altering the DNA results.