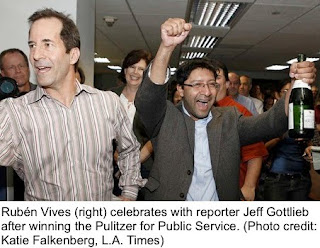 Rubén Vives is celebrating. He won the Pulitzer Prize for Public Service yesterday, along with fellow L.A. Times reporter Jeff Gottlieb, for their incredible work exposing corruption in the city of Bell. Their coverage led to criminal charges of several city officials, including the city manager, who had given himself an $800,000 salary.

Rubén lands this major recognition after only 3 years experience as a reporter.

“It’s an honor,” he tells me. “The Pulitzer for Public Service defines what we journalists strive for each day, which is to serve communities and make a difference. It reminds us why newspapers are so important. They serve as watchdogs and are crucial to the checks and balances that are needed. It’s great to have gotten this award, but to me it’s just a bonus, the real award for me is that we helped a small town retake their government.”