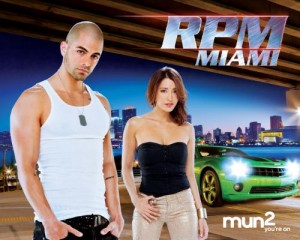 The premiere of “RPM Miami,” a bilingual original dramatic series on mun2, became the network’s highest rated launch during prime time in more than 3 years. According to Nielsen, almost 300,000 people tuned in to the show, which debuted Sunday, May 1st at 10 pm, beating all Hispanic cable networks.
The weekly “dramela” (drama + novela) is a 13 episode scripted Telemundo Studios production. The show stars actors Adrián Bellani and Fernanda Romero, who was recently sentenced to jail time for making false statements to immigration authorities about her marriage to an American citizen, and is currently in deportation proceedings.