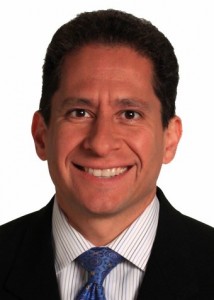 Today is Chris Hernandez’s last day as political and city hall reporter for KSHB’s 41 Action News in Kansas City.  He had been with the station since 2004.  He starts a new job tomorrow as Marketing Director for the Unicorn Theater.

“Since I am our political reporter, I offered to stay on until Aug. 7, because it’s an election night (August primary in KS & MO),” says Chris. “I am super happy to be making this move, because I have known the producing artistic director of the theatre for about 15 years. I’ve supported the theater and attended productions there, and I think they are terrific.

Of course, leaving the news business was still a tough decision, since most people, including myself at times, thought I was a “lifer”. But I’d been thinking, off and on, about making a change for a couple of years.”

Chris tells me he was actually covering the mass shooting in Aurora when he was offered the new job.  But while news may be his passion, he decided it was time for his family and personal life to come first.

“I interviewed Barack Obama when he was a little known IL state senator, and when he was a presidential candidate. This year I’ve talked with Republican candidates from Ron Paul to Mitt Romney. Despite the fun stories, and important stories, I came to the conclusion that I needed to make a change and move on to a second career. When I returned to Kansas City a few years back, it was to come home and be close to family and because I was tired of being in a long-distance relationship. My non-news life has been great here, and this new job is just another step towards enjoying that even more.”

Chris began his career in TV at Kansas City’s WDAF-FOX 4 in 1993, then moved to a news reporter position at WEWS in Cleveland for three years. From there he went to WBBM’s CBS 2 News in Chicago for two years before joining KSHB in 2004.

“I’m not yet sure what I’ll miss from the TV news business. Although when I was on vacation in Colorado… I saw a pair of long underwear on sale, and I almost bought it, until I realized I’ll never again have to stand outside doing live shots during a blizzard….. and I started laughing out loud, right there in the store!”