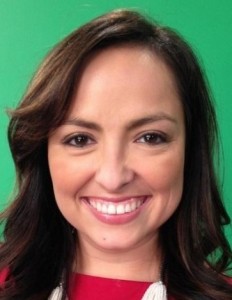 Iris Hermosillo has left her job as weekend morning meteorologist and general assignment reporter at KCTV-5 after more than 3 years at the Kansas City station. Her last day on-air at KCTV was Nov. 17.

She has taken a job in her hometown of Phoenix.  She starts next week as weekend morning meteorologist at ABC affiliate KNXV-TV.

While at KCTV, Iris was also the co-host of  “Que Pasa, KC,” a recently created show aimed at the Hispanic community.

Prior to joining KCTV5, she spent 2 years at KSNF-TV in Joplin, MO,  as a weekend weather anchor, general assignment reporter and anchor/producer for the station’s Spanish-language 5-minute newscasts.

Before that, Iris was a reporter, anchor and weather producer for Cronikite News Service.  She started her broadcast career at Univision Phoenix as a graphics producer and production assistant.