Telemundo has announced it will start nationwide castings for the new reality singing competition “La Voz Kids,” featuring contestants between 7 and 14 years old.

The auditions will take place around the country in January and February and Telemundo plans to start airing “La Voz Kids” in the spring.

The winner of “La Voz Kids” will receive a recording contract with Universal Music and a scholarship.

Given the success of “The Voice” around the world, the show’s creators launched the kid spinoff, which has been sold in Finland, Romania, South Africa, The Netherlands, Vietnam, Ukraine and now arrives to the U.S., but via Telemundo.  There currently isn’t an English U.S. version of the show.

“La Voz Kids” is a presentation of Talpa Media USA Inc. The show is created by John de Mol, who will executive-produce along with Stijn Bakkers and Katrina Fernandez. 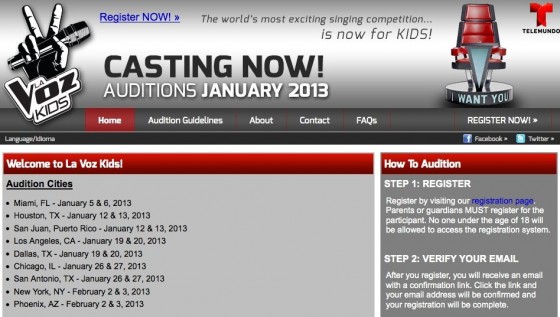