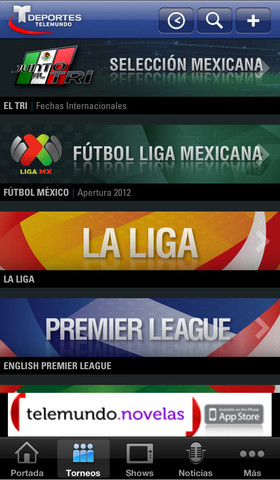 Telemundo today announced the launch of its new Deportes Telemundo App 2.0 for iOS and Android devices, saying it’s “a one-stop solution for sports fans offering the latest sports news, scores, statistics and analysis,” and that it “enhances many of the innovative features” of the previous version with new customizable options.

It’s available for download on iTunes and the Google Play store.

– New “my favorites” system that allows users to choose their favorite soccer teams and receive customized game alerts and scores on their homepage and mobile devices.

– Up-to-the-minute match scores and stats from world leagues including La Liga, English Premier, Serie A, Liga Mexicana, Champions League and the 2014 World Cup Qualifiers with the ability for users to add future events to the device’s calendar from the home page.

The Deportes Telemundo App 2.0 is the latest output from Telemundo’s Digital Media Group.