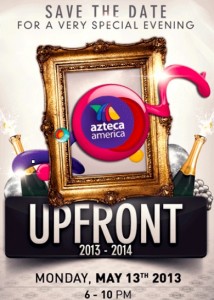 Azteca América today announced it will be holding its annual New York upfront event on May 13, from 6-10 pm.

A spokesperson says they’re not yet disclosing location, but confirmed that the network’s CEO Martin Breidsprecher, Bob Turner, President of Sales, and Marlene Braga, VP of Programming will be among the presenters for the evening.

The 2013 even marks 10 years since Azteca América held its first Upfront in NYC.