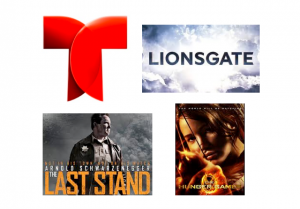 Box-office blockbuster “The Hunger Games” will air on Telemundo in 2015.  The Spanish-language network has signed a multi-year licensing agreement – until 2017 – with Lionsgate to broadcast several films from the entertainment company’s library, including “The Last Stand,” (currently in theaters) “The Three Musketeers” and 16 other titles.

This deal extends an ongoing relationship between Telemundo Media and Lionsgate.

The two companies previously partnered to bring other blockbusters to Telemundo.  Last year, the Spanish-language network aired “Twilight” saga films and have yet to broadcast “The Expendables,” “The Expendables 2” and “Red,” among others.