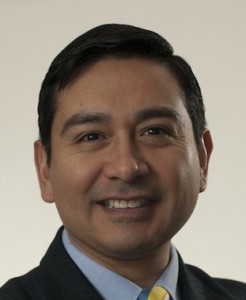 Ruben Ramirez has left his job as national assignment editor and a correspondent for PBS’ Nightly Business Report, after slightly more than a year in the position.  His last day at NBR was Friday, March 1st, starting a new job just 3 days later, on Monday, March 4.

Ruben says the move “was really an opportunity to take all of the skills I’ve acquired over more than 15 years in television and combine them to help take The Street’s video content to the next level.”

Prior to NBR, Ruben held positions at Reuters Television, CNNfn, the financial network of CNN, and CNBC.  He began his career at ABC News in New York.

The Street provides business/financial content on the Web since it was founded in 1996 by Jim Cramer and The New Republic‘s Martin Peretz.