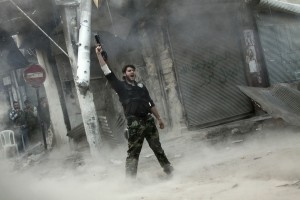 A rebel fighter gestures for victory after firing a shoulder-fired missile toward a building where Syrian troops loyal to President Bashar Assad were hiding as they attempted to gain terrain against the rebels during heavy clashes in the Jedida district of Aleppo, Syria, Nov. 4, 2012.

This site uses Akismet to reduce spam. Learn how your comment data is processed.