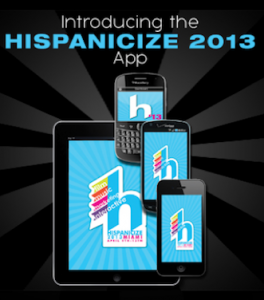 We’re just one week away from the kick-off to Hispanicize, slated to be the biggest Hispanic social media, journalism, marketing, film, music event – what its founder, Manny Ruiz, hopes to turn into the Latino South by Southwest.

Today, the conference organizers launched an app to help attendees navigate through all the sessions and events that will take place from April 9 to the 14.

iPhone (plus iPad & iPod Touch) and Android phone users can download the app on their mobile devices by going to the App Store or Google Play and search for “Hispanicize.”  More details about the app’s capabilities are available here.

In its fourth year, Hispanicize has added a journalism showcase, with the objective of broadening the event’s appeal to traditional journalists.

More journalists and media personalities have been added to the roster of speakers, including Manny García, Executive Editor of Miami’s El Nuevo Herald and media mogul Nely Galán, who is promoting The Adelante Movement, a social movement to empower Latinas.

The final schedule has also been posted online:  http://hispanicize2013.sched.org/