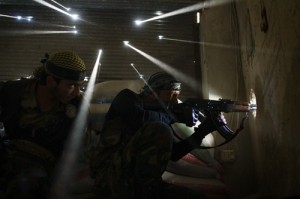 Two rebel soldiers stand guard in the Karmel Jabl neighborhood of Aleppo as over a dozen holes made by bullets and shrapnel peppered the tin wall behind them. The dust from more than one hundred days of shelling, bombing and firefights hung thick in the air around them as they took turns guarding their machine-gun nests. The precincts of Karmel Jabl and Al-Arqoob are strategically important because of their proximity to the main road that separates several of the main battlegrounds in the city, from one of the largest rebel-controlled regions in Aleppo. It is hard to know how many troops the regime has deployed along the Karmel Jabl / Al-Arqoob neighborhoods (considering that this region is one of many frontlines, most of them scattered along the Western and Southwestern sections of the city). Moreover, the popular belief is that if the regime ordered its infantry (most of it is largely composed of Sunni Muslims) to charge the rebels, a large number of the soldiers would defect to the opposition. For this reason, face-to-face combat is rare. Instead, the regime relies mostly on tanks, indirect fire (mortars and artillery), airplanes and snipers. Snipers can hold a line of several streets and can take weeks for the rebels to locate and neutralize them. Both sides (the Free Syria Army and the regime) rely heavily on snipers – the cat and mouse game of Aleppo’s frontlines. Two regime snipers had closed several side streets keeping the rebel positions in check. As the Free Syria Army soldiers attempted to flank them (by punching holes on the walls of houses, both sides can travel several blocks from house to house without being seen by the opposing side – most importantly, without been spotted by the snipers), the regime forces reinforced their positions with tanks (which only move a few meters at a time, mostly under the cover of night in order to minimize their exposure to RPG’s (rocket-propelled grenades). © Javier Manzano/AFP

This site uses Akismet to reduce spam. Learn how your comment data is processed.