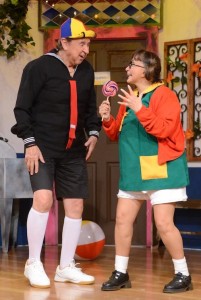 During the show,  he participated in a surprise reunion with María Antonieta de las Nieves, most famously known as “La Chilindrina.”

After years of not talking to each other, the Mexican comedians, who for decades have personified the characters in the children’s program, put their differences behind them and “made up” on Telemundo’s morning show.

During the program, de las Nieves blamed the press for creating a non-existent feud between the two actors.