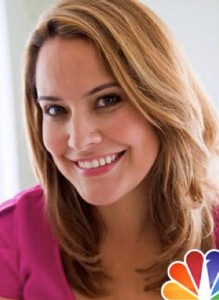 NBC News correspondent Diana Alvear is no longer with the network.  Her contract was not renewed, according to TVNewser.

Her stay at NBC was brief – just a year.  She joined the network in July of 2012, reporting for all platforms of NBC News, including “Today,” “NBC Nightly News,” MSNBC, NBCLatino.com, and nbcnews.com.

TVNewser today also reported that 4 other people have left the network: correspondent Thanh Truong and 3 senior producers, two from “Nightly News” and one from “Today.”

Before taking the job at NBC, Diana spent 4 years as a correspondent for ABC NewsOne in Los Angeles and also filed reports for the weekend editions of “Good Morning America,” “World News,” and the “World News” webcast.

She was previously an anchor/reporter at WGBA-TV, the NBC affiliate in Green Bay, Wisconsin.