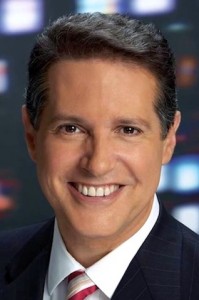 Emmy Award-winning journalist and anchor Antonio Mora has joined Al Jazeera America as host of “Consider This,” a current affairs talk show. The program will air weeknights at 10 pm, starting August 20, when the network is scheduled to launch.  He’ll be moving to New York City, where his show will be based. He’ll be commuting to Miami on weekends, where his family will remain.

“I’m really excited,” Antonio tells me. “I was testing the waters to see what was out there.  There were a number of possibilities, but this became the best and most interesting of them all – an interview show on a national basis.”

Although his hiring was announced on Friday, Antonio officially started the new job on Monday, July 22 and has already begun show rehearsals.
“The intention of the format is to try to focus on one newsmaker and do a very long interview at the top of the show. Then there’ll be a panel where we’ll bring in  real Americans into the conversation, instead of using the regular pundits, to be part of the discussion of the issue of the day.  And it will have an active component, where we’ll include questions from viewers and get them into the show in real time.  We’re going to offer thoughtful discussion without being as hurried as most networks are.”

Antonio has been off the air since December of 2012, when he left WFOR, channel 4, the CBS O&O in Miami, where he had been an anchor for 4 years. He says he had been considering several options, including a local news anchor gig, but that the Al Jazeera America offer was the most appealing.

“I’ve been very impressed with how serious they are and how much they really want to do serious and in depth news rather than the most the salacious news of the day,” he says. “They’re now the biggest news network in the world. They’re going to have more bureaus in the U.S. than american networks, and internally, they don’t want to waste time airing the Jodi Arias trial. They want to do real news.  A lot of networks now cover trials and forget about what’s really happening in the rest of the world.”

Prior to his anchor job at CBS 4 in Miami, Antonio spent 6 years at WBBM in Chicago.  From 1994 to 2002, Antonio was a news anchor, senior correspondent and regular substitute host for “Good Morning America.”  He also anchored breaking news coverage for ABC News, served as a correspondent for “World News Tonight with Peter Jennings” and was a regular substitute anchor for the weekend edition of “World News Tonight.”  He was the daily backup anchor for Peter Jennings in the weeks following the September 11 attacks.  He also reported for “Nightline” and “20/20.”

A Harvard Law grad, he began his TV career as a sports anchor and reporter for Univision 41, later joining Telemundo 47 in New York as an anchor and producer. Before launching his broadcast carreer, he was a corporate finance attorney.

Al Jazeera America has made several high-profile hires this past week.  ABC news vet Kate O’Brian was named President of the network on Monday. Marc Gatto, formerly of Discovery, Turner and CNN was named EVP for Broadcast Operations and Technology on Tuesday.  A day later, it was announced former CNN and CBS correspondent Joie Chen was tapped to host “America Tonight,” the channel’s daily prime time news and current affairs magazine program.