Telemundo Media announced today it will produce “Top Chef: Estrellas,” a first-ever Spanish-language version of the popular competition series.  The new original production, hosted by novela star Aylin Mujica, will feature 8 Hispanic celebrities competing for the Top Chef title and $100,000 to be given out to the charity of their choice.

Lorena Garcia, one of the country’s leading Latina chefs and a competitor on season four of Bravo’s “Top Chef Masters” and Jaime Martin Del Campo and Ramiro Arvizu, the owners of award-winning Los Angeles restaurant “La Casita Mexicana,” will join as judges.

The following are the eight competing celebrities:

Christian Chávez – singer and actor best known for his role as Giovanni Mendez Lopez in the hit novela Rebelde and its spin off pop group RBD. 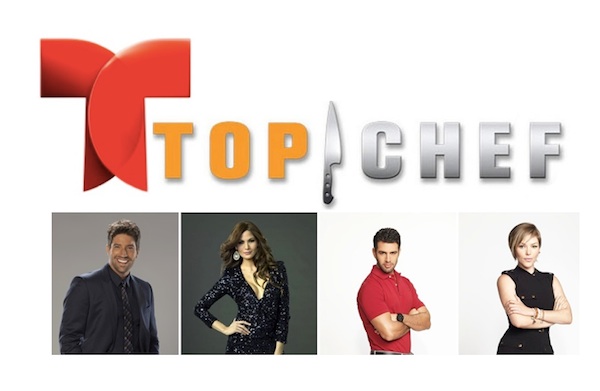 Lorena Herrera – Mexican actress and singer who has participated in more than 50 films since she began her career as a novela actress.

Cynthia Olavarría – actress, television host, fashion model, and former Miss Puerto Rico who competed in the 2005 Miss Universe in Thailand, where she was first runner-up.

Telemundo’s Spanish language version will feature celebrities cooking their favorite dishes under the guidance and coaching of professional chefs.  The celebrities will participate in weekly competitions and use different “tools” in their preparations to impress the celebrity chefs and survive the grueling competition.