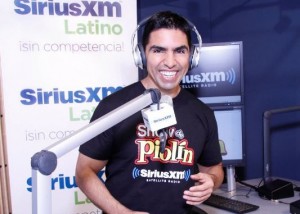 Tied to today’s announcement of the launch, SiriusXM is introducing a low-cost SiriusXM Español satellite package and will also offer access to Piolín’s new show for free for a litmited time.

The 4-hour morning show will air live Monday through Friday 6:00 am – 10:00 am PST.  “El Show de Piolín” will be broadcast from SiriusXM’s studios in Los Angeles and will replay multiple times throughout the day on Piolín Radio.

For the launch, SiriusXM will introduce SiriusXM Español, a $5.99 monthly satellite subscription package that gives listeners access to Piolín’s new show and channel along with a suite of specially selected channels.

Additionally, listeners will get a “Piolín y más,” complimentary trial from October 18 through February 15, 2014 that will allow them to tune in to “El Show de Piolín” via the SiriusXM Internet App on smartphones and other connected devices, as well as online.

Piolín’s show on Univision Radio was abruptly cancelled on July 22.