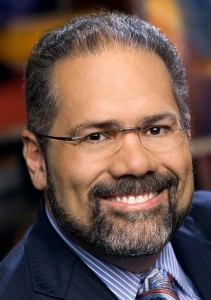 Ray Suarez has joined Al Jazeera America as the permanent host of its daily program Inside Story. The official announcement was made today. His first day hosting the program will be Monday, Nov. 11.

He will continue to be based in Washington, DC. The show airs Mon-Fri at 5 pm ET.

“I am really happy to be heading to Al Jazeera America. In a very short time it has shown it is striving for quality, for depth, and a more complete portrait of our country,” Ray tells me. “These have been some tough years for the American news business. It’s a real pleasure to head to a place that wants to do this right, and is growing while everyone else is pulling back.”
According to the network, “Inside Story” provides analysis, background and context on the top stories of the day, with each episode featuring a panel of expert guests who examine and debate domestic and international topics consuming media outlets in the U.S. and around the world.

Before accepting the job at Al Jazeera, Ray spent 14 years as chief national correspondent for “PBS NewsHour.” He resigned, after considering he was being marginalized from the show and that there was no longer any room for growth for him at PBS.  His last day there was Oct. 25.

Ray is the author of “Latino Americans,” the companion book to the 6-part PBS documentary series that aired in September. He spoke to Media Moves about his book and his role in the documentary, shortly before the release date.

A multi-award winning journalist, Ray was inducted into the National Association of Hispanic Journalists Hall of Fame in 2010.

Ray is the second Latino to get his own show on Al Jazeera America.  Antonio Mora was the first. Antonio was hired as the host  of “Consider This,” a current affairs talk show that airs weeknights at 10 pm ET. in July, before the network’s launch.

Ray’s hire signals the new network is following through with its commitment to open new bureaus in the United States and hire additional personnel, announced last week.