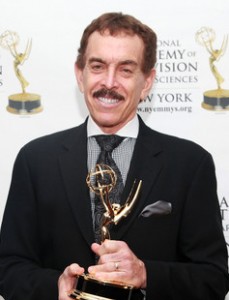 48-time Emmy award-winning reporter Arnold Díaz has landed a new job at WPIX-11 in New York. He’ll be part of a newly-formed investigative unit at Tribune’s CW affiliate. His first day will be Monday, March 31.

Arnold was left jobless in January, when Fox-owned WNYW, channel 5, shut down its consumer investigative unit.  But it didn’t take too long for him to bounce back.

Arnold is well known to New Yorker viewers from decades of investigative reporting for WCBS, WNYW and 20/20. He’s the creator of the Shame on You and the Shame, Shame, Shame brands, exposed wrongdoing and incompetence by private industry and government agencies.

Prior to working in New York, he reported for WPLG-TV in Miami from the early to mid-1970s.

His work has led to his winning 48 Emmy Awards, the National Press Club Consumer Journalism Award and the Consumer Federation of America Media Service Award.

In 1995, Arnold was inducted into the National Academy of Arts and Sciences Silver Circle.