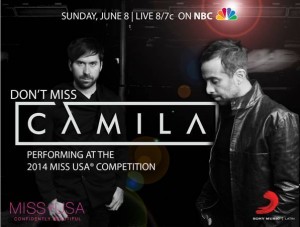 NBC is being more inclusive in the musical choices for its shows.

This will be the first time that Camila’s award-winning composer, singer and producer Mario Domm and guitarist Pablo Hurtado will perform on an English-speaking network, marking their crossover.

The duo will also be making their first official public performance since releasing their new album “ELYPSE” on Wednesday, June 3.