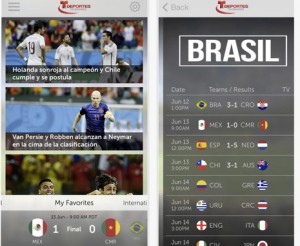 Telemundo doesn’t have the World Cup broadcasting rights…. yet, but it’s prepping up for when it does.

The network introduced a new version of its Deportes Telemundo app for mobile devices as part of a re-launch of its digital sports platforms.

Available for Apple and Android devices, the app, released yesterday, can be downloaded through the DeportesTelemundo.com website.