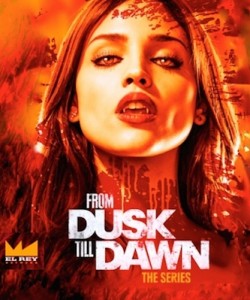 Less than a year since its launch, 24-hour English-language network El Rey, founded by filmmaker Robert Rodriguez, may be hard to find on cable, but at least one of the channel’s shows has a chance to gain a little more exposure.

The entire 10-episode first season of “From Dusk Till Dawn: The Series” is now available on video streaming service Netflix.

Based on the cult-classic film of the same name, the series premiered on El Rey Network this past March.

Season two is scheduled to start production in October, with all its leading cast members returning, including Wilmer Valderrama, D.J. Cotrona, Zane Holtz and Eiza Gonzalez.

“From Dusk Till Dawn: The Series” is an El Rey Network production in association with Rodriguez International Pictures, FactoryMade Ventures, Miramax and Sugar Cane Entertainment.