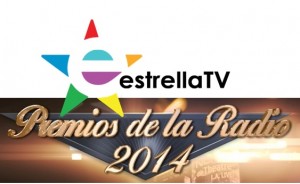 Estrella TV will be airing the 15th annual Premios de la Radio next Thursday, November 6 from 7 to 11 pm (ET/PT), live from the Nokia Theater in downtown Los Angeles.

The event has been produced by Liberman Broadcasting for the past 15 years. It began airing on television when Estrella TV was launched in 2009.