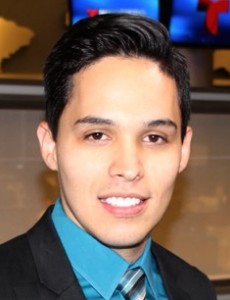 Santiago Gallego is starting a new job within the Telemundo family. Beginning today, he joins KVDA Telemundo San Antonio as a multimedia journalist.

This is Santiago’s first on-air reporting job. He was most recently a desk coordinator and producer for the Telemundo Station Group desk in Miami. His last day at that post was October 3.

Santiago began his journalism career as an intern for Noticiero Telemundo in January and was hired on staff three months later.

After graduating from Florida International University, he was part of the Hispanic Media Futures program at Telemundo Media where he was mentored by Telemundo executives in the areas of news, digital, research and communications during a 5 month period at the end of 2013.