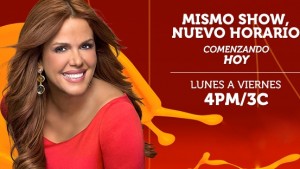 Telemundo today debuts a series of local newscasts across the country as part of its previously announced investment in expanding news coverage.

The new local half-hour news programs will launch at 5:30 pm EST/PST and 4:30 pm CST/MST in the following 14 markets:

As a result, its network programming schedule had to be adjusted. Starting today, “Al Rojo Vivo con María Celeste” moves to 4 pm EST/3 pm CST, one hour earlier than its current schedule.