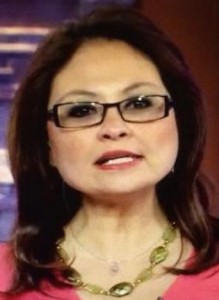 Today is the last day at KABB for Sylvia Rincón. After 12 years as a reporter/anchor with the San Antonio Fox affiliate, Sylvia has decided to leave her broadcast career to become Director of Communications at Southside Independent School District.

She starts the new job next Tuesday, November 11.

“After 18 amazing years as a reporter, it was a tough choice to leave,” Sylvia tells Media Moves. “But, there is a great opportunity to help a community that I am passionate about. I believe in news and journalism and will always be here to support my colleagues in news and the industry.”

The San Antonio native says she’s passionate about education and could “not pass up the chance to make a difference with our youth on the south side of San Antonio.”

Before KABB, Sylvia also worked as a reporter at KNXV in Phoenix.

Michael Valdés, the 9 pm weekday anchor, exited the station in September after a 20-year run. He had been KABB’s main anchor since 2000. He told the San Antonio Express News it was his decision to leave and the parting was amicable.

KABB is owned by the Sinclair Broadcast Group, which acquired WOAI in 2012. Sinclair is consolidating both stations under one roof in December of this year.