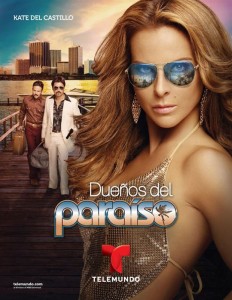 Telemundo’s “Dueños del Paraiso” scored the highest premiere in its history among total viewers and was the #1 Spanish-language program, in its time period, among adults 18 to 34, women 18 to 34 and males 18 to 34.

The super series starring Kate del Castillo reached a cumulative audience of 3,080,000 total viewers and 1,880,000 adults 18 to 49 on its premiere night, Tuesday, January 13, according to Nielsen.

Locally, the new narco novela ranked #1 among adults 18 to 49, regardless of language, in Los Angeles and Miami and was the #1 Spanish-language program in its time period in Chicago, San Francisco and Denver, in that same demo.

On a digital front, “Dueños del Paraiso” was the #1 most social Spanish-language program for the night, ranked on Tweets among Hispanic Networks, according to Nielsen Social.

Social promotional efforts for the series reached over 24 million people generating over 39 million impressions on Facebook.