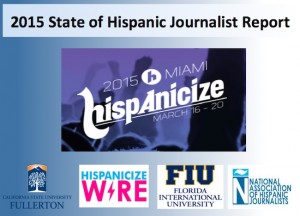 Latino journalists are struggling financially, are concerned about job security and are less optimistic about their careers than when they first started, as the tendency for companies to hire freelancers instead of staffers continues to grow.

Those are some of the findings of the 2015 State of Hispanic Journalists Report, which surveyed 260 Latino journalists who work in print, TV, radio, online media and blogging in the United States and Puerto Rico.

Journalists present during a panel session at the Hispanicize 2015 conference, where the online survey results where presented, questioned what would be done with the information.

As one attendee put it, the results are nothing new and talking about them is “preaching to the choir.”

One former newspaper editor complained about the devaluation of salaries, pointing out he had previously made over $100,000 managing a publication, whereas now, the same position might garner barely $60,000.

The panel, comprised by representatives from each of the survey sponsors – NAHJ President Mekahlo Medina, Cal. State Fullerton’s Dr. Dean Kazoleas and Inez Gonzalez, FIU’s Dr. Raúl Reis, and Hispanicize Wire’s Bill Gato, was unable to specify what could be done with the information collected, other than say an advocacy group should step in and pursue the issue.

Here are some highlights of the survey conducted between February and March of 2015:

The impact of online and social media

Despite a negative outlook, there was a slight rise in optimism from those surveyed about the future climate of journalism for Hispanic journalists:

– 58% of Latino journalists (same percentage as last year) believe the rise of online and social media is having a positive impact on their careers
– 34% said they were more optimistic about their careers today than when they first started (a slight increase from 32% in last year’s survey).
– 53% of Latino journalists feel their news organizations are ready to use new technology to grow despite the challenges presented by online and social media – though that number is lower than the 59% who said the same thing last year.

A summary presentation of the findings can be downloaded here.