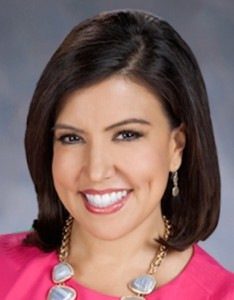 Olivia Fierro has left her weeknight anchor job at KVVU channel 5, the FOX affiliate in Las Vegas, to move back to Arizona.

She has returned to Phoenix independent station KTVK, where on Monday, March 23, she started co-anchoring “Good Morning Arizona.”

“It was a unique opportunity to return to a station where I worked for 7 years. And as it turns out, the station had since been bought by Meredith, owner of Fox5 in Las Vegas, so I was able to stay with the same company I’ve worked for since 2009,” Olivia tells Media Moves.

She shares the desk from 5:30 to 9 am with anchor Scott Pasmore, and does the last hour of the show with Javier Soto.

Olivia previously worked at the station as morning anchor, from January 2003 to April 2009.

“Phoenix is a homecoming for me, we have family here and I met and married my husband here. I’m excited about the shift change. As much as I loved working nights in Las Vegas, I hope that the early morning shift will allow me to be home for dinner and bath time for my toddler!”