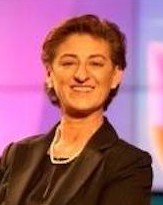 Angela Navarrete returns to Texas. She has been named General Manager and Director of Sales of Univision stations in El Paso, effective immediately.

In her new role, she’ll oversee all aspects of station operations including ad sales, marketing, production and promotions for all the Univision-owned and operated radio stations in El Paso: KBNA-FM 97.5; KAMA-AM 750; and KQBU-AM 920.

Navarrete joined Univision in 2002 as General Sales Manager for Univision Radio in Texas and was quickly promoted to Director of Sales.

She was promoted to VP and GM of three radio stations in Fresno, CA where she worked for six years, before being transferred to El Paso to oversee the Radio and Digital operations.

In 2012, Navarrete rejoined the team in Fresno as GM and Director of Sales. She promoted to Station Manager in August 2014.

Before Univision, she was GM of Amigo Broadcasting in Austin. She also worked for Rodriguez Communications and as an Account Executive for Telemundo in Dallas.