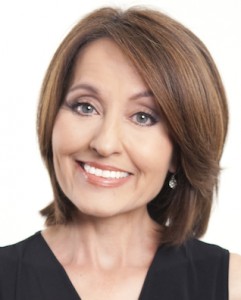 She’s one of the longest-running anchors in Los Angeles. But this Friday, April 24, Sylvia López will anchor her final newscast on KCAL-9.

A multi-Emmy and Golden Mike award-winner and currently KCAL’s 4 and 9 pm anchor, Sylvia decided to leave her 30-year career in broadcast news to go back to school and pursue a Masters in Public Health.

“I began to get a little frustrated that I was only reporting the news about all the problems we have in the world and all around us. I’m an active person and I realized it would suit me more to have a role in fixing some of these problems,” Sylvia tells Media Moves.

“Maybe at this point in my life I can do something where I truly have an impact. I really want to roll up my sleeves and do something significant.”

Sylvia says the turning point for her – and what helped her decide to switch careers – was when she visited her goddaughter in Guatemala last summer, where she volunteered at a rural clinic as medical student candidate.

“I spent a lot of time there and I met several Americans and people from all over the world doing amazing things –  medical students from Texas that were building prosthetic limbs, a church group from Utah building clean burning stoves in people’s homes, and a group of women from San Diego raising money for a clean drinking water project for a social services agency in Guatemala. They were all volunteering and doing good things. I started feeling this yearning to do something like this… that could improve quality of life.”

Sylvia will be a full-time graduate student this fall at California State University, Northridge. She leaves behind a journalism career laden with many highlights and accomplishments.

“I’ve had so many incredible opportunities. I was lucky to work for a station that decided to undertake huge projects and allowed me to cover such amazing stories. A few years ago the station sent me and a crew to Mexico for 2 weeks – we traveled non-stop from Juarez all the way to the border with Guatemala and produced a five-part series that covered presidential elections in Mexico, immigration and the Guatemala border refugee crisis.”

Throughout her tenure at KCAL Sylvia was also sent on location to cover international news events, such as a major gas explosion in Guadalajara, World Youth Day in Cologne, Germany and the election of Pope Francis in Vatican City.

In addition to her skill and experience, she attributes many of her numerous assignments to Mexico to her ability to speak Spanish. 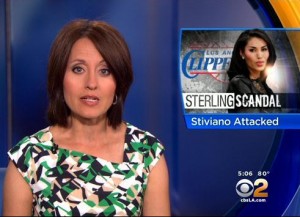 “Looking back, speaking Spanish played a role in getting some assignments…. I had the opportunity to cover stories that mattered to the Latino community… I’m lucky – my mom always spoke Spanish to us, even if we didn’t answer back in Spanish. But I had that fluency, and it such a huge benefit when it came time to do stories in Mexico – and there were many.”

Just days after announcing her decision to leave the news business, two other Latina anchors have called it quits to focus on family. Mirthala Salinas, anchor at KRCA-62 in Los Angeles, let fans know about her departure after her final day on the air on Friday, April 17. That same day, Catherine Anaya, from KPHO in Phoenix, also revealed she’ll say goodbye to the anchor chair in July.

“It’s hard for women in the business. I have been working nights since my second daughter was 2 years old. That I wasn’t there at nights for her, it’s something I’ve thought about. That was not the main motivation for my change, but it is piece of it,” admits Sylvia, who has two daughters. “It’s an amazing career that gives an adventurous fulfilling life, but as many other jobs, it’s challenging if you have a family.”

Sylvia says two newsroom colleagues – who recently finished master’s degrees at CSUN – were big motivators for her going back to school – 30 years after graduating from USC.

“They really inspired me and they’re so supportive. I know a lot of people there [at CSUN] who took me under their wing. I’m looking forward to getting started.”

Believe it or not, she’s also excited about being an intern!

“Yes, I’m going to be an intern again! I’m really excited about learning, and being an intern is being part of that experience – to watch, ask and experience different programs.”

An L.A. native, Sylvia feels very fortunate to have spent the bulk of her journalism career in her hometown.

She started out at KCBS-2 as an intern, moving on to a production assistant job. Her first on-air job was at KOB, the NBC affiliate in Santa Fe. After just one year, she moved back to L.A. and has never left since.

By the time she says goodbye this Friday, she will have spent a total of 28 years with KCAL and KCBS.

“It’s kind of surreal. There are so many emotions. I grew up in this place, in this market… I feel we’re all part of this big media family and I’m saying goodbye. It’s a little bit sad, but at the same time it’s exciting, because I’m thrilled to pursue something I have a connection with. It feels right.”