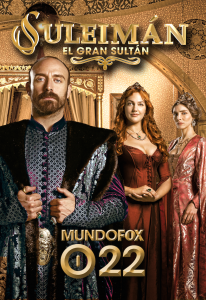 At the close of May 2015 Sweeps, KWHY-TV Canal 22, the MundoFOX flagship station in Los Angeles is celebrating its greatest average primetime ratings increase.

The station’s 8 pm slot shot up 293% from last year among the key demographic of Adults 18-49 and 450% among Adults 25-54. The success is attributed to Turkish soap “Suleimán el gran sultán” – a surprise hit for MundoFox in several markets besides L.A.