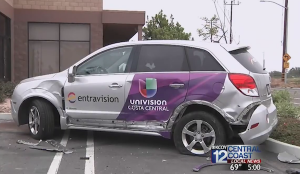 Windows were shattered, satellite dishes were damaged, computers and hard drives were destroyed, and company cars were smashed in the parking lot.

Damages are estimated at tens of thousands of dollars.

What will help prosecutors in the case is that the suspect allegedly documented the crime by posting photos on Twitter while he trashed the headquarters of the Entravision station.

According to KEYT, when Santa Maria police arrived to the station, they found 34-year old Pablo Quiroz Jr. still inside the building.

Quiroz, a former KPMR employee, has been charged with commercial burglary and felony vandalism.

Incriminating photos and tweets were discovered in a Twitter account with the handle @elreyguardiante, associated with Quiroz’s name.

The story made it to the top of the  5 pm news at KCOY: